The primary thesis statement of this web site is presented towards the beginning of my Truth & Light presentation.

It currently reads as follows:

Accuracy and precision are hallmarks of intelligent design.

We should expect them from the Cydonia complex.

Based on this assumption, I set out to prove Cydonia is in fact artificial."

Knowing what I know now, I realize this thesis statement was woefully inadequate.

"Knowing the Pyramids of Giza, Teotihuacan, ancient and modern cities, their art, etc... are all intentionally and precisely aligned according to Earth's N/S/E/W grid as well as specific stars and astronomical events on specific dates such as the vernal equinox and summer solstice, we should expect similar precision and alignments from the layout of Cydonia."

It should read like this because after more than five years of hard work this is exactly what I ended up proving.

While I managed to establish quite a bit in Truth & Light, the actual proof was yet to come.

A little more than one year after I thought I was 'finished' with Truth & Light, I realized I was not.

On May 9, 2009, I was forced to post an important update which is now included at the very end of the above presentation.

The May 9 update sparked a flurry of private emails between me and Richard Hoagland.

During our discussion it became clear to me that it was finally time to take my presentation off Enterprise Mission's private forum and go 'public'.

I would have liked to debut my work at Space.com's public forum since that is where I was originally inspired to begin this project.

Unfortunately, for reasons I document here, I've been permanently banned.

Instead, I chose to debut Truth & Light at Keith Laney's Hidden Mission forum.

Ironically, my debut might just as well have been at Space.com because the reaction was familiar albeit from an entirely different perspective.

Fortunately the dissenting voices, just like the ones at Space.com, inspired me to think critically and discover a few new exacting truths and major revelations.

Before I share them though, so many people have objected, out of hand, to the validity of 'mirroring' images.

They simply assume it is impossible someone might encode information this particular way.

Allow me to put this assumption to bed once and for all.

I can prove my discovery of a coded system of reflections is completely valid.

All that is required is another thesis statement and some hard work which I gladly present in Rorschach. 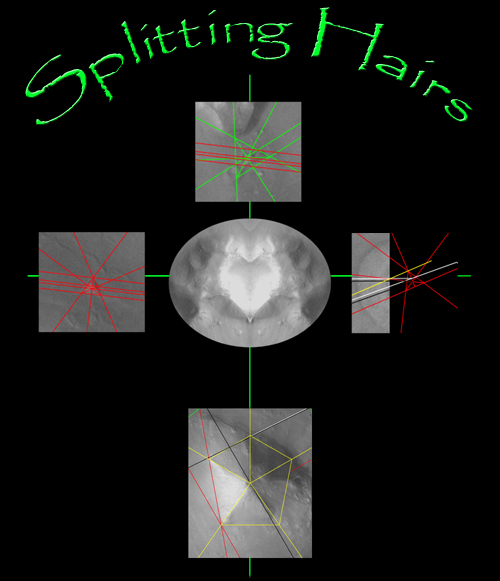 I wrote A Final Measurement with the intention of describing exactly how I came to realize the profundity of being able to derive truth from the light.

In doing so, I also present a very small measurement.

When taken in context along side the mountain of other evidence it strongly suggests nothing is what it seems.

THEMIS & 4.7 is something I put together a long time ago.

I refer to it once in Truth & Light and use it to establish that THEMIS data is oriented exactly 2.35 degrees (more tetrahedral code) away from Hoagland's notated True North.

After seeing all the empirical evidence for oneself, it should be abundantly clear what Cydonia represents.

It represents... the Apocalypse.

It is a Greek word that literally means, "lifting of the veil".

In today's context, the word Apocalypse could easily be substituted with... disclosure.

Thus, I conclude the following.

Hoagland must have reached the same conclusions long before I did and decided to intentionally misrepresent Mars' True north.

In doing so, he cleverly facilitated a scenario which would force someone... anyone... to prove him right or wrong.

In order to prove this, 'one' would inevitably have to realize the significance of finding "truth in the light" and independently conclude the Face on Mars really is...

Therefore, it is reasonable to conclude that Hoagland predicted Cydonia was all about the apocalypse and enabled at least one of the prophecies to be fulfilled.

Furthermore, by misrepresenting several key measurements, he provided an ingenious way of getting totally independent confirmation for some of the finer geometric points.

Surely, if these were indeed Hoagland's intentions, he would have left evidence or proof that he knew.

I prove Hoagland knew in the following paper. 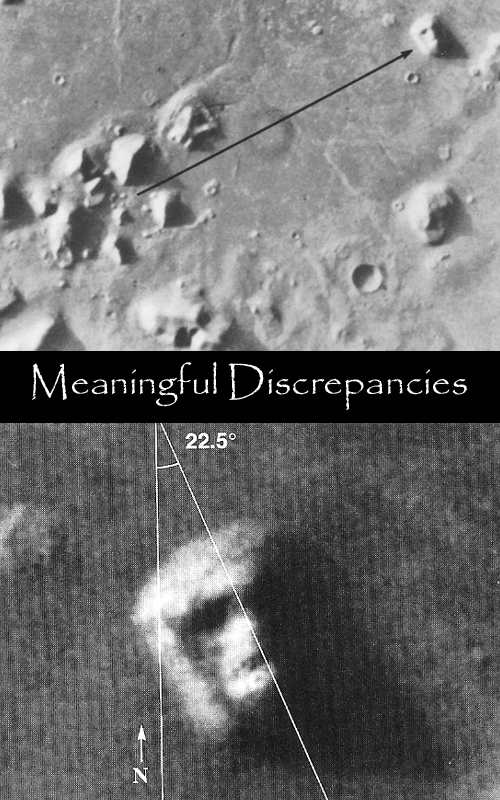 The above conclusion is also heavily supported by other evidence I've published in a post to my Blog.

In my next paper, I focus on dating Cydonia.

I put forth evidence that challenges the assumption that Cydonia lies in ruin.

Back to Main Page